CHICO — Hundreds of people displaced by the Camp Fire camping outside of the Chico Walmart are being asked to leave by Sunday — and many of them are unsure of where they will go next.

As news spread throughout the camp on Thursday, there was confusion about who exactly had given the order to get people out.

Chicoan Luigi Balsamo, who identified himself as one of the organizers of the operation, said it was the Red Cross.

However, a Red Cross spokesperson strongly denied that the organization — which has no jurisdiction over the area — had anything to do with it.

“I don’t think anyone wants to take responsibility for it, but the bottom line is Mother Nature is going to need us to shut it down,” Balsamo said. “It’s going to rain. Everybody running the place needs answers so we’re all in favor of the deadline because we can’t keep sustaining that thing.” 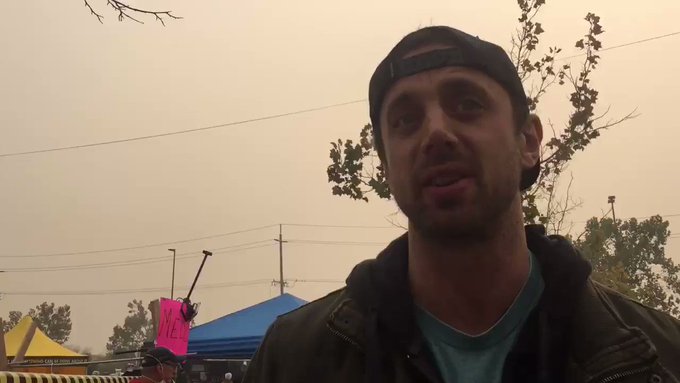 Luigi Balsamo, one of the people who has coordinated resources at the Chico Walmart, says that displaced people have to leave the premises by Sunday. Hundreds have been camping there. “How can we continue to sustain this?” he asks. #CampFire

Rain is in the forecast by Thanksgiving.

After hearing in the early afternoon about the coming closure, Magalia resident Michael Crowder said he would probably find another parking lot to stay in. Crowder explained that he didn’t know of an evacuation center that would accept his 10-year-old pitbull.

He added that he was worried about catching an illness like the norovirus which is going around some of the local shelters. Crowder was sitting outside of a tent with fellow Magalia resident Terry Gardey, a friend from church.

Gardey, who was at the camp with her adult grandson, said she initially evacuated to Chico’s DeGarmo Park, but left when resources including hand cleaning stations were taken away. The Walmart parking lot at least had those, along with portable toilets.

Gardey said she was trying to get to the Bay Area, where she had a place to stay, but didn’t have the funds to get there.

Carole Whitehurst, also from Magalia, said she was initially staying with a family member after evacuating exactly one week ago but had to leave because visitors could only stay a few nights at the rental property. She heard about the resources being offered outside of Walmart on social media and set up camp in the open field next to the store over the weekend.

“The past two nights, it’s grown to this,” Whitehurst said, motioning to the tents surrounding her.

Asked where she would go from here, Whitehurst said as a Round Valley Indian Tribes member, she hoped to get money for a hotel stay from her tribe. Fear of getting sick has kept her away from evacuation centers — she would rather sleep in a car.

There have been some incidents at the camp, though.

“It’s gotten super bad the past two nights,” Whitehurst said, while keeping an eye on a neighbor’s tent. “There’s tons and tons of people now. Now things are getting stolen out of tents. People are stealing, looting out of the tents.” 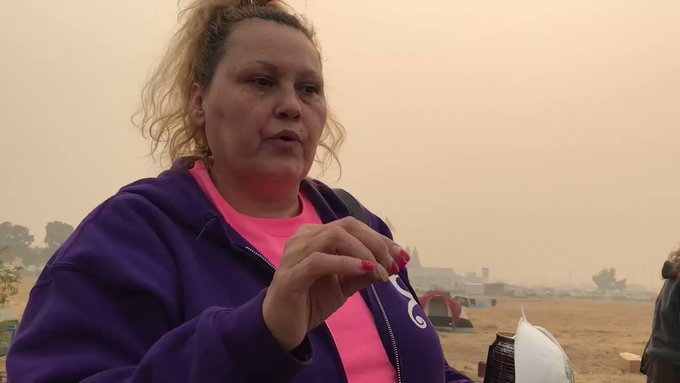 Magalia resident Carole Whitehurst says transients have been taking resources intended for people displaced by the #CampFire at the Chico Walmart.

In a large section of the parking lot along Forest Avenue, hundreds of people rummaged through heaps of donated clothing, boxes of food and rows of other supplies. Several food trucks were serving up hot meals. Volunteers passed out water bottles and snacks in the parking lot and camp.

Steve Bigalow, a 58-year-old Butte Valley resident, stopped by the donation hub to pick up a few items of clothing. Bigalow has been sleeping in his car outside of the Chico Lowe’s with Dana Kenton, his fiancé of seven years, age 57. They don’t know if their house is still standing.

Bigalow said he has been blown away by support from the community in terms of donations and other acts of kindness. For the past few days, a Chico woman — a stranger — has sought out their car and offered them money and home-cooked food.

“I’ve never seen anything like this in my entire life,” he said, getting teary-eyed.

Asked why they weren’t staying in an evacuation center, Bigalow said he didn’t want to take a space away from somebody else. They have blankets and turn on the heater when the cold gets unbearable, he said. The temperature has been dipping below 40 degrees at night in Chico.

“There’s people out there who need it more than us,” he said, adding that they didn’t have kids to take care of.

Chico City Manager Mark Orme said he was also trying to find out the cause for the closure of operations in the the Walmart parking lot and that the city had nothing to do with it.

A spokesperson for the Federal Emergency Management Agency said she was looking into it as well.

The assistant manager of the Chico Walmart said that the company had not asked or demanded that anyone leave the property.

Comments are held for moderation and your email will NOT be used for Spam. Troll comments not accepted so don’t waste your time. Cancel reply

This site uses Akismet to reduce spam. Learn how your comment data is processed.

Missouri – Outhouse in the Sky – Death From Above

The U.S Military Will Use Weather as a Weapon on AMERICAN Citizens